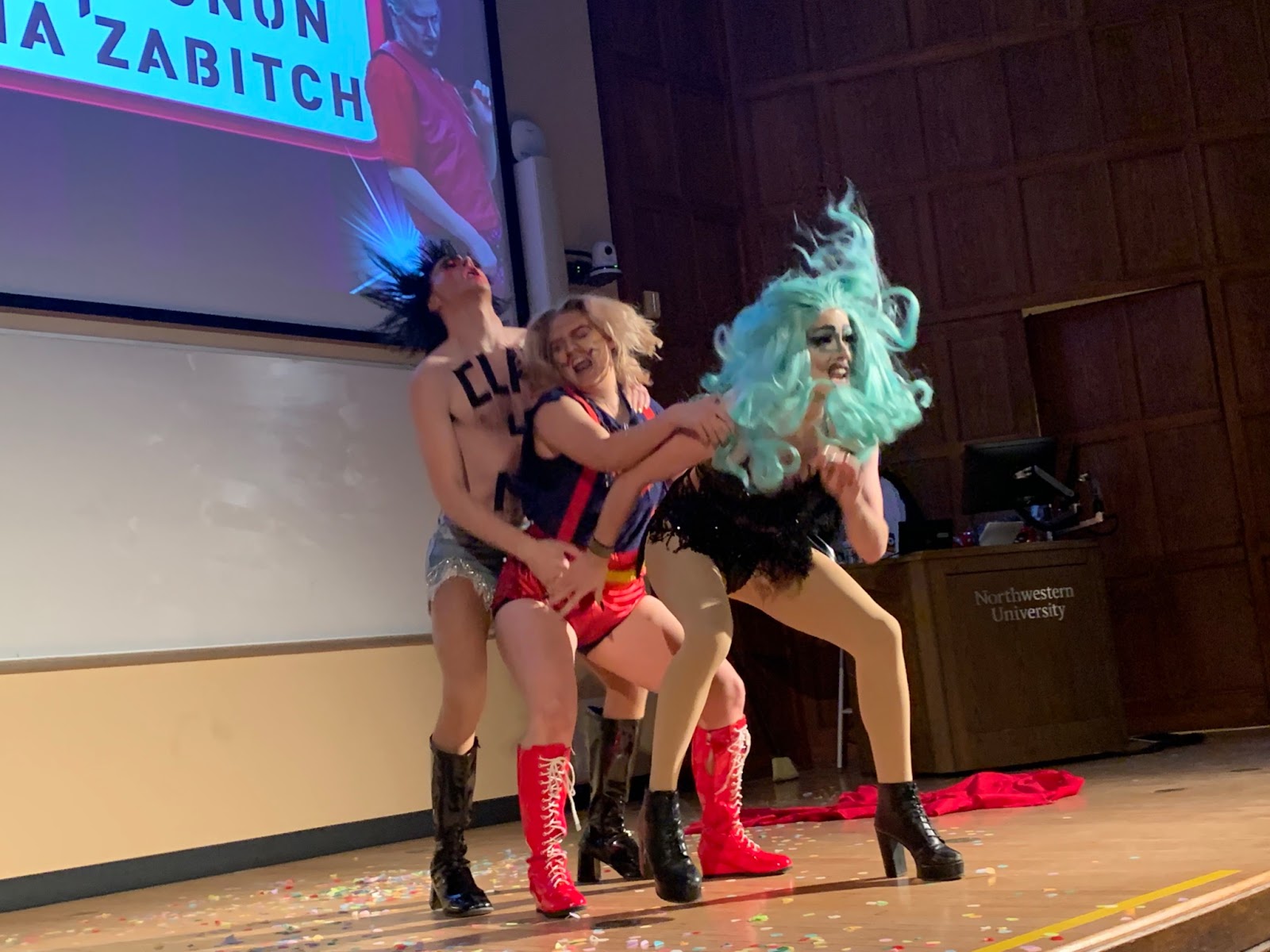 From left to right: Student drag performers Filet Mignon, Even Steven and Karma ‘ZaBitch lip sync together to Lady Gaga’s “Applause.” All photos by Trent Brown / North by Northwestern.

The air in Lutkin Hall is electric. It’s half-past-eight on Wednesday, Nov. 17, and the show was supposed to start thirty minutes ago. What started as a sparse motley crew on the University Place sidewalk just 90 minutes prior is now a full house bursting with anticipation. Every time someone claps or raises their voice above the chatter, I whip around: Did I miss something? Suddenly the lights dim as an A&O Productions spokesperson gets up to welcome the first performer, and who walks out from stage right? 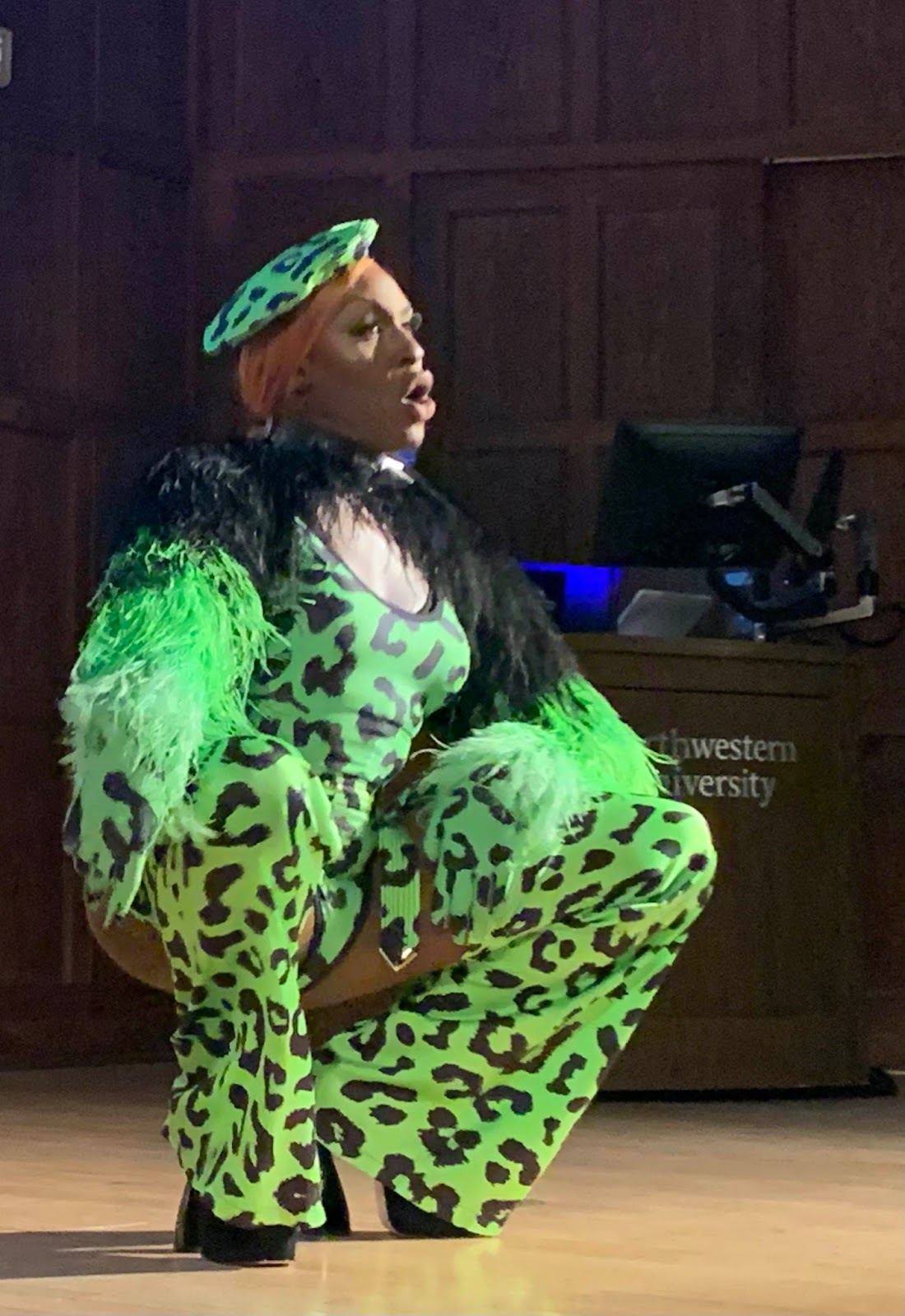 Shea Couleé owns the stage as the first act of the night.

The RuPaul’s Drag Race star, who tied for 3rd on Season 9 and won Season 5 of the show’s All Stars spinoff, was immediately at home on stage like she owned the place – and after her performance, I would’ve said she ought to. The Chicago native duck-walked to “Look” by Leikeli47 and dipped to Bree Runway’s “GUCCI” featuring Maliibu Miitch before bodying and embodying “Kiss Me More” by Doja Cat and SZA.

At this point, I was simply struck by awe. Here I was on a rainy Wednesday night watching the Shea Couleé perform. At every pose, every dip, every little twirl, the crowd of students screamed and cheered like the ’Cats had just won the Rose Bowl, and I’m not ashamed to say I was one of them.

Between songs, Ms. Couleé (if you’re nasty) took to the microphone to amp up the crowd, asking for students from each year to cheer themselves on, and we ate it UP. She could have told us anything she wanted and we would’ve screamed our throats out for the opportunity to listen. When her set was done, Shea made way and announced her Drag Race sister and fellow A&O headliner Alyssa Edwards was up, and the dancing queen made her entrance. 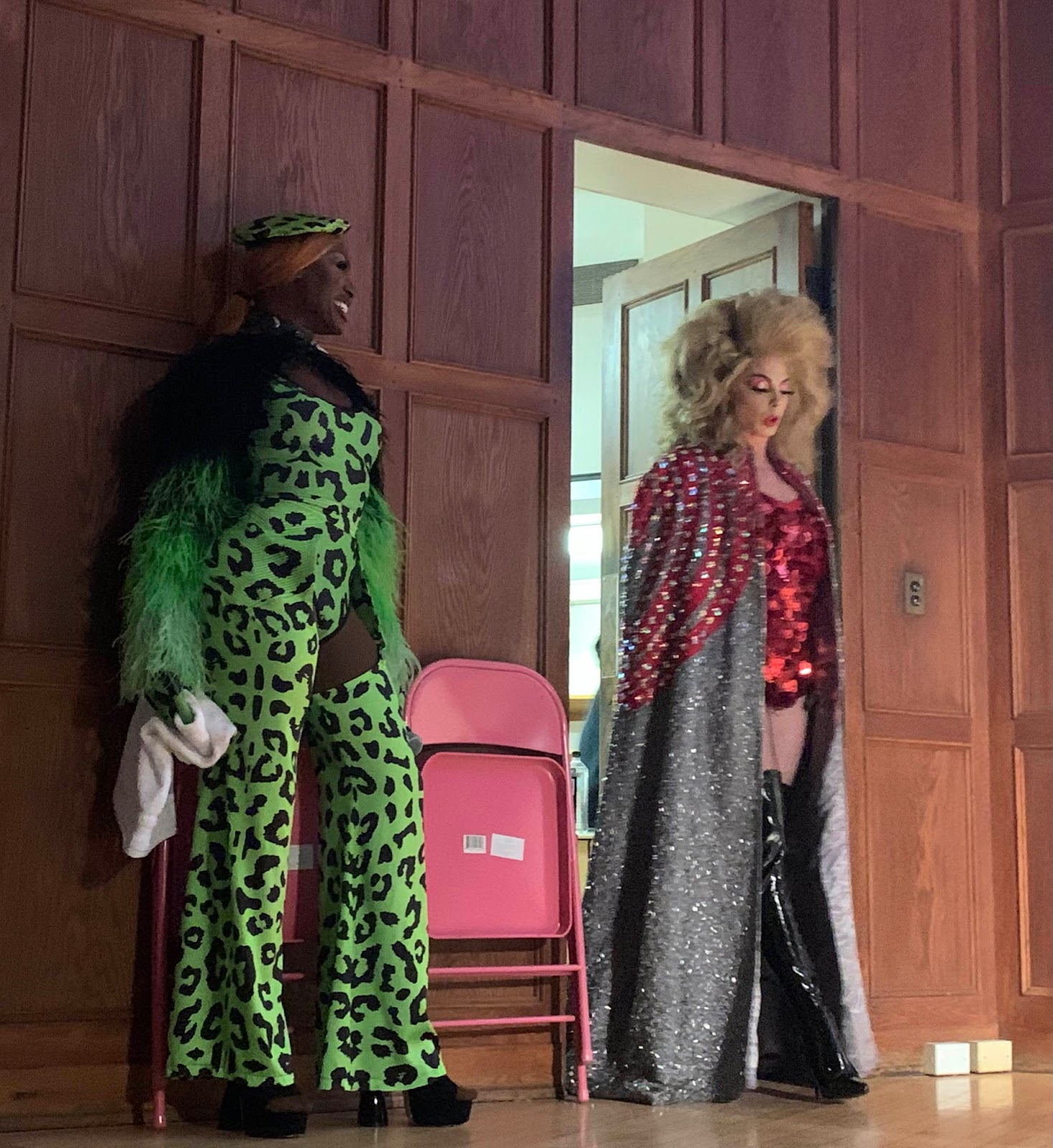 When I say the volume in that auditorium was astronomical, I mean it. Alyssa, who finished in 6th place on Drag Race Season 5 and 5th place on All Stars Season 2, got right to work, tearing the stage up to Crystal Waters’s “100% Pure Love” (of Season 13 fame). She tore off her sparkly “sequenced” cloak in dramatic Alyssa fashion before galavanting through the aisles of Northwestern students who were losing their fucking minds at their proximity to Alyssa Edwards.

When she got back on the stage, she just stood still. We were all drawn in – what was she about to do? And then, completely effortlessly, she dropped into the most aggressive side split possible. The audience’s reaction would have beat out the boom she made if we hadn’t been holding our breath up until she did it. 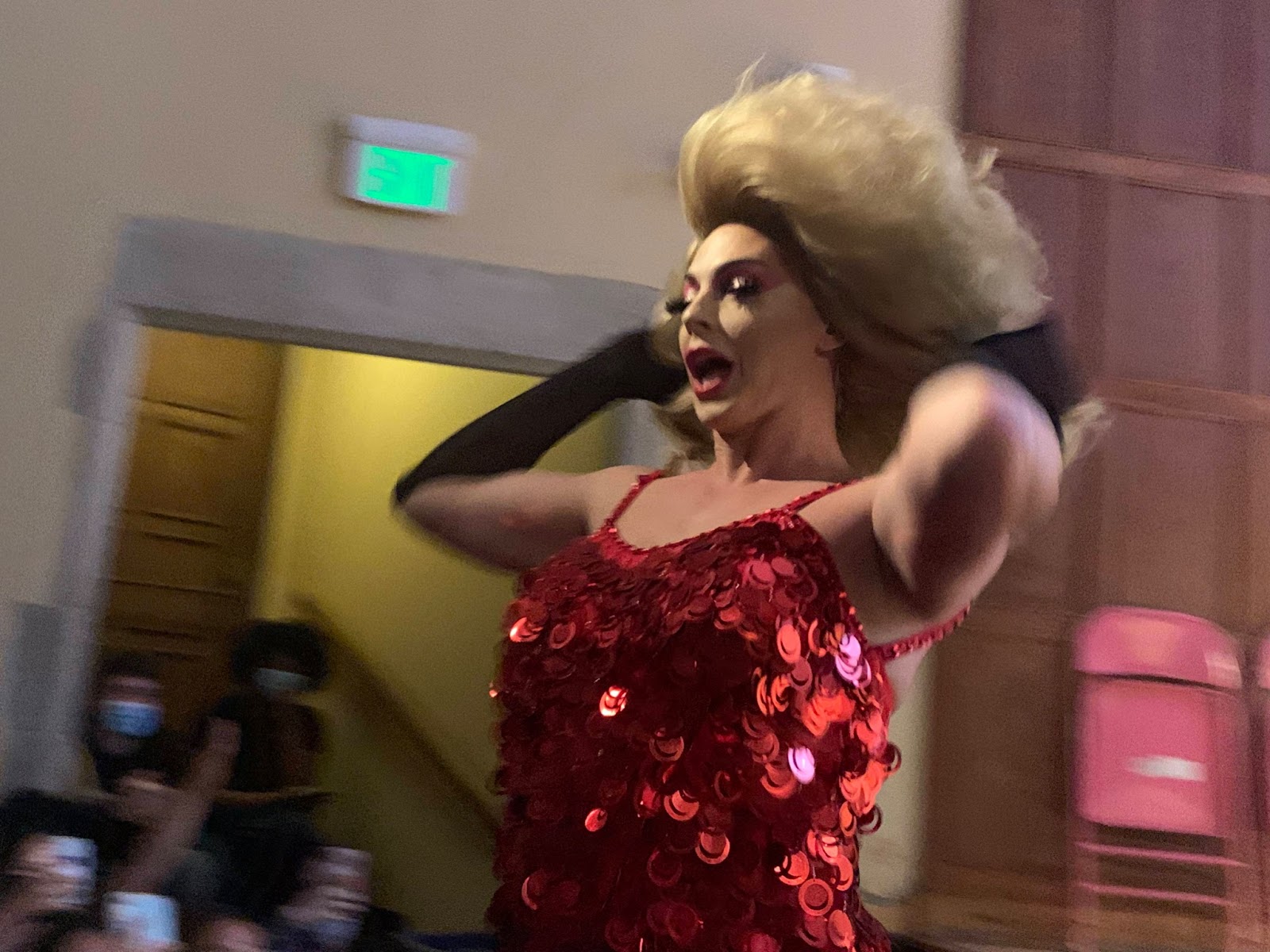 Alyssa Edwards takes to the floor of the Lutkin auditorium to perform right next to the audience.

When she was done with her performance, Alyssa asked the crowd if there were any heterosexual men in attendance. Two brave souls stuck their hands up. Alyssa being Alyssa, she decided to bring those two audience members on stage to make them compete to see who could sissy that walk better.

The first competitor fearlessly pranced and danced on stage like he had nothing to lose before literally bowing down to Alyssa in an important display of reverence. Then, the two of them struck a pose together at the front of the stage for the crowd to cheer the student on.

The next competitor was a bit more reserved and looked uncomfortable, but Alyssa got him to break out of his shell by showing him what to do. By the end of his time to shine, it seemed like he was having a bit more fun.

Then, she brought up two female audience members to have a twerking and dance competition. The first competitor immediately busted out some impressive twerking skills and, speaking as a proxy for the crowd, I think we all assumed that would be the end of that. But when it was the second competitor’s turn, she fell into a split that nobody expected and definitely brought it up to a draw. 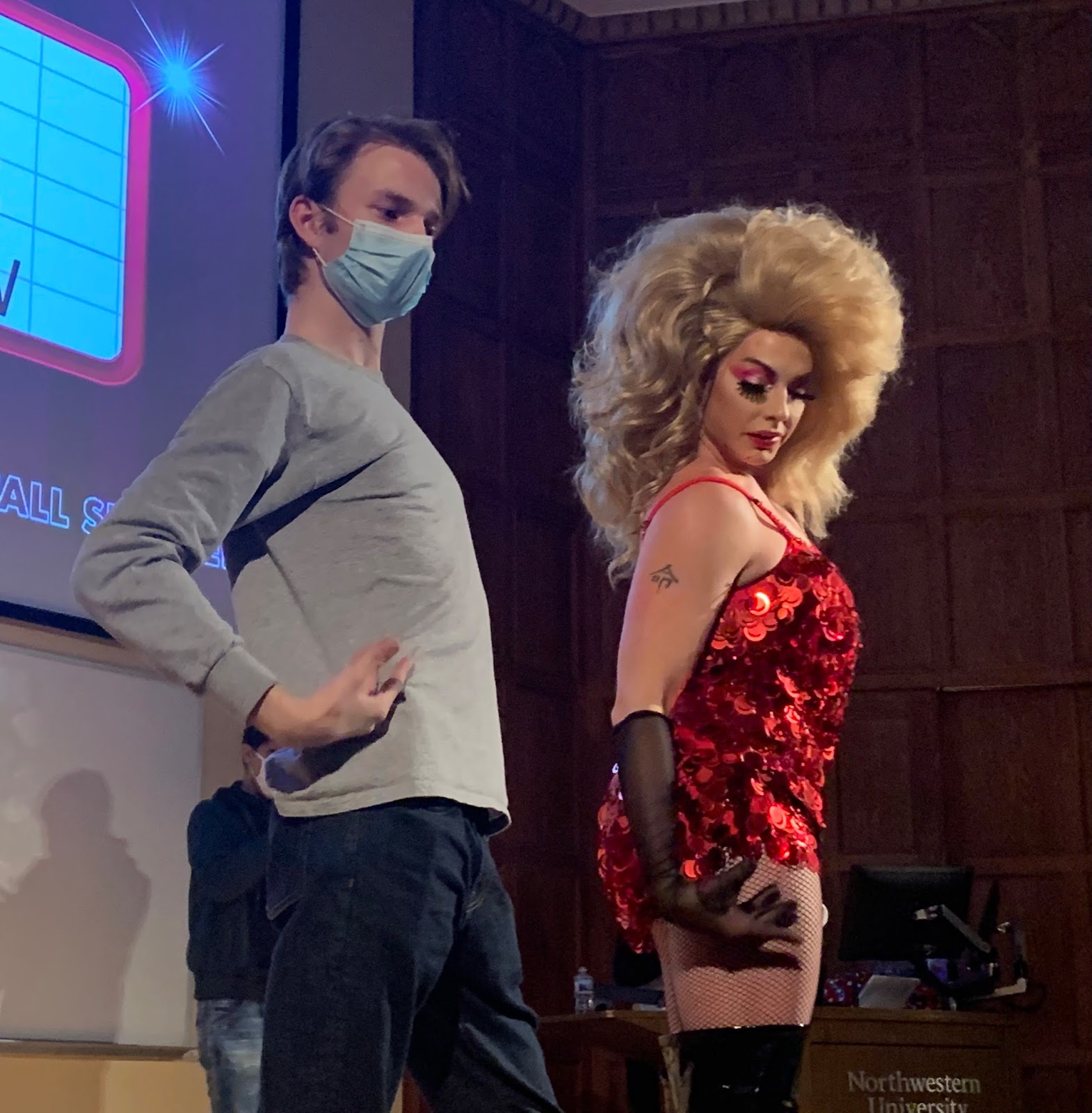 Alyssa Edwards poses on stage with the first male competitor, who was clearly feeling his oats. 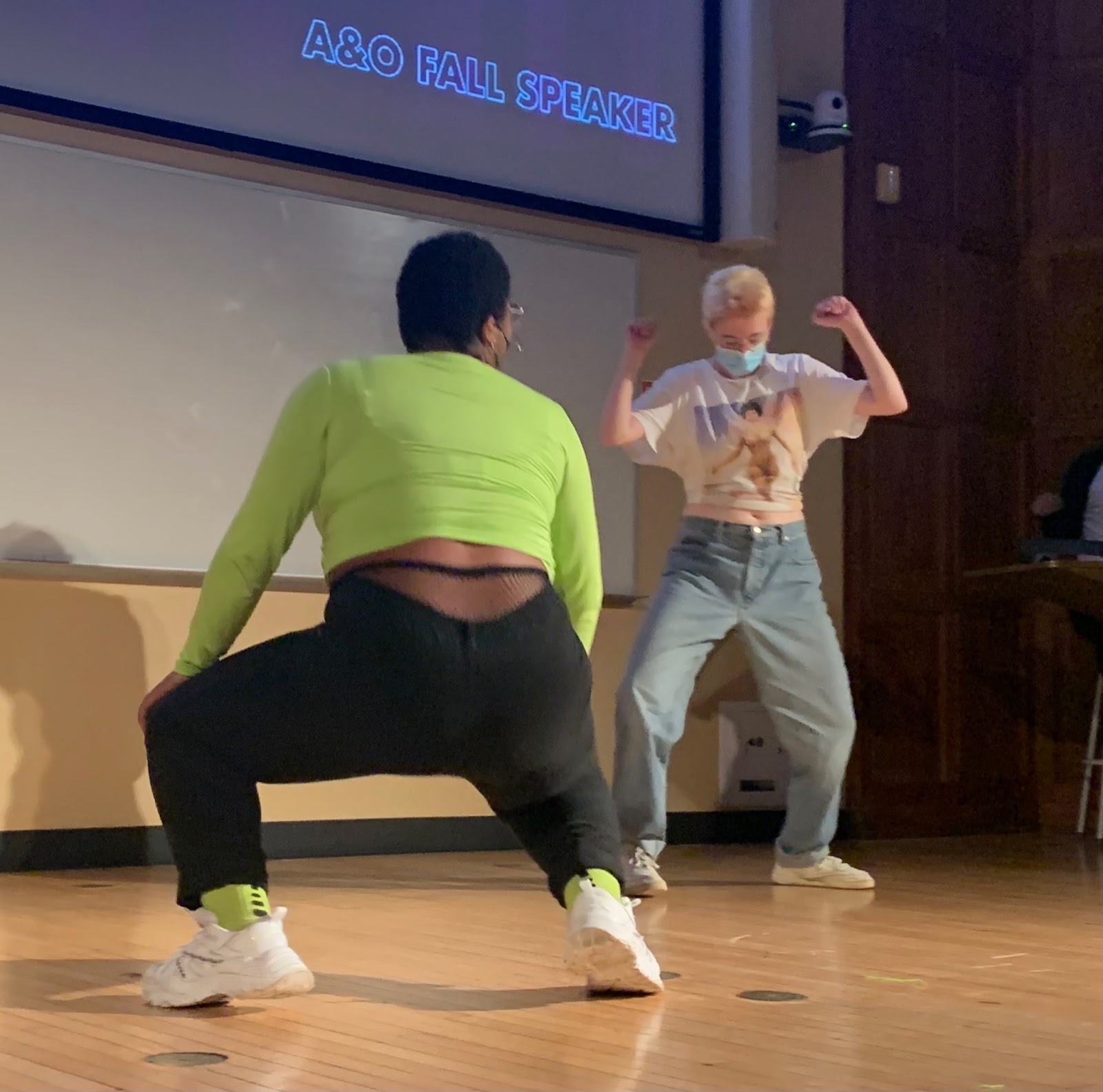 The next set of impromptu student competitors put up some pretty fierce competition.

After that, it was time for the student drag performers to come out. Shea and Alyssa took their seats at stage right to enjoy the show themselves. First up: Filet Mignon. A self-described “literal piece of bloody cow meat,” they twirled and jumped on stage (performance complete with a wig reveal) before running backstage and dragging out a duffle bag. Containing what, you might ask? A pair of mannequin legs sticking out almost cartoonishly to indicate a dead body.

Using a fake sword, Filet Mignon set to work before triumphantly pulling a mannequin arm out of the bag, complete with a splash of blood made from felt where the arm was separated from the shoulder. They danced around with the arm before, well, using it to fake-fist themselves. The performance brought a much-welcome element of filth to the show. 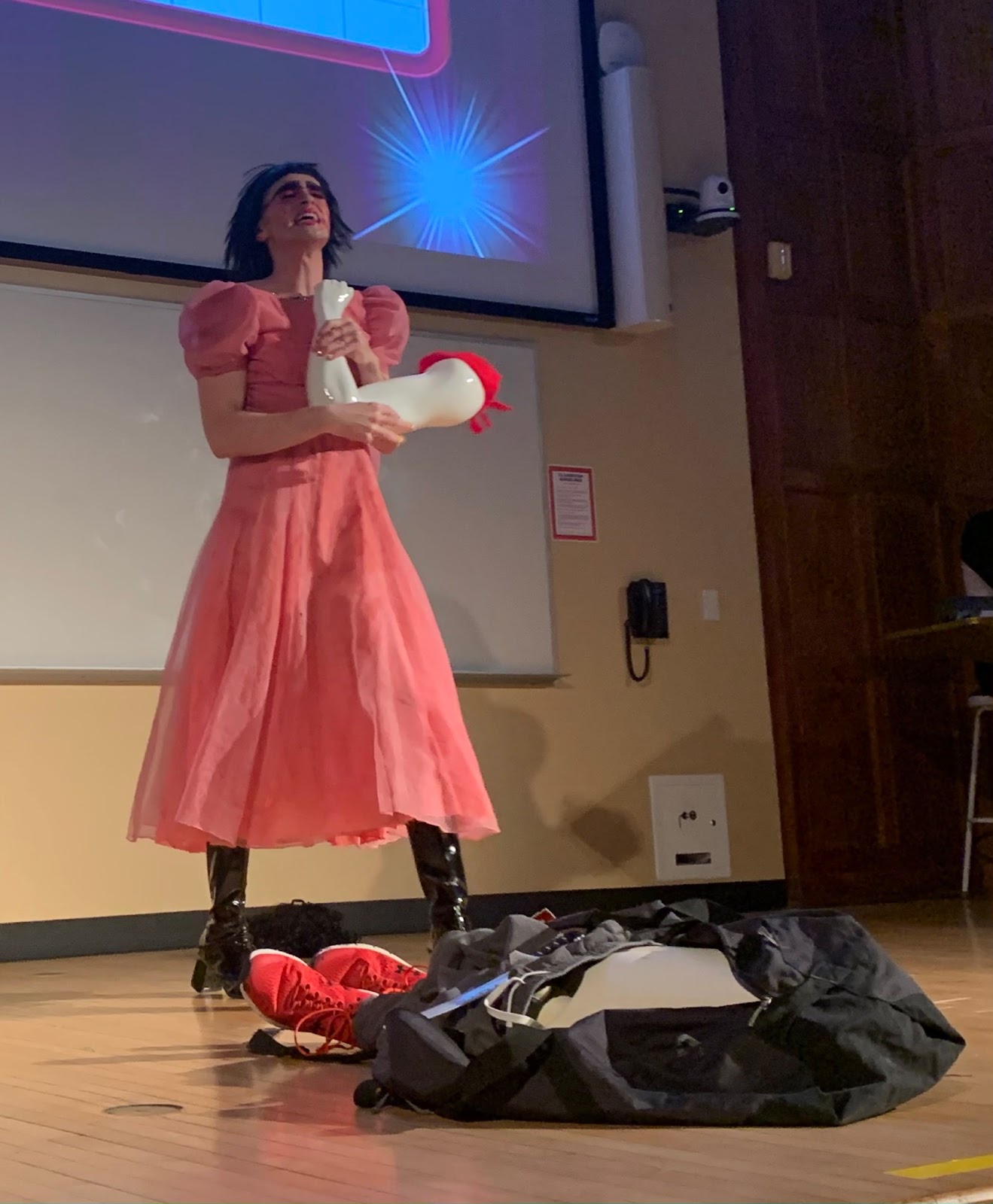 Then it was Karma ‘ZaBitch’s time to shine. After a brief spoken-word lip sync in businesswoman realness, she stripped down to a black leotard with sparkly fringe to perform with a nitrous burst of energy, including a drag queen’s staple move: the death drop. Karma’s creativity and passion really showed through in her performance. It’s clear why she made top five and won the title of fan favorite in the seventh season of Survivor at Charlie’s Chicago in Boystown. 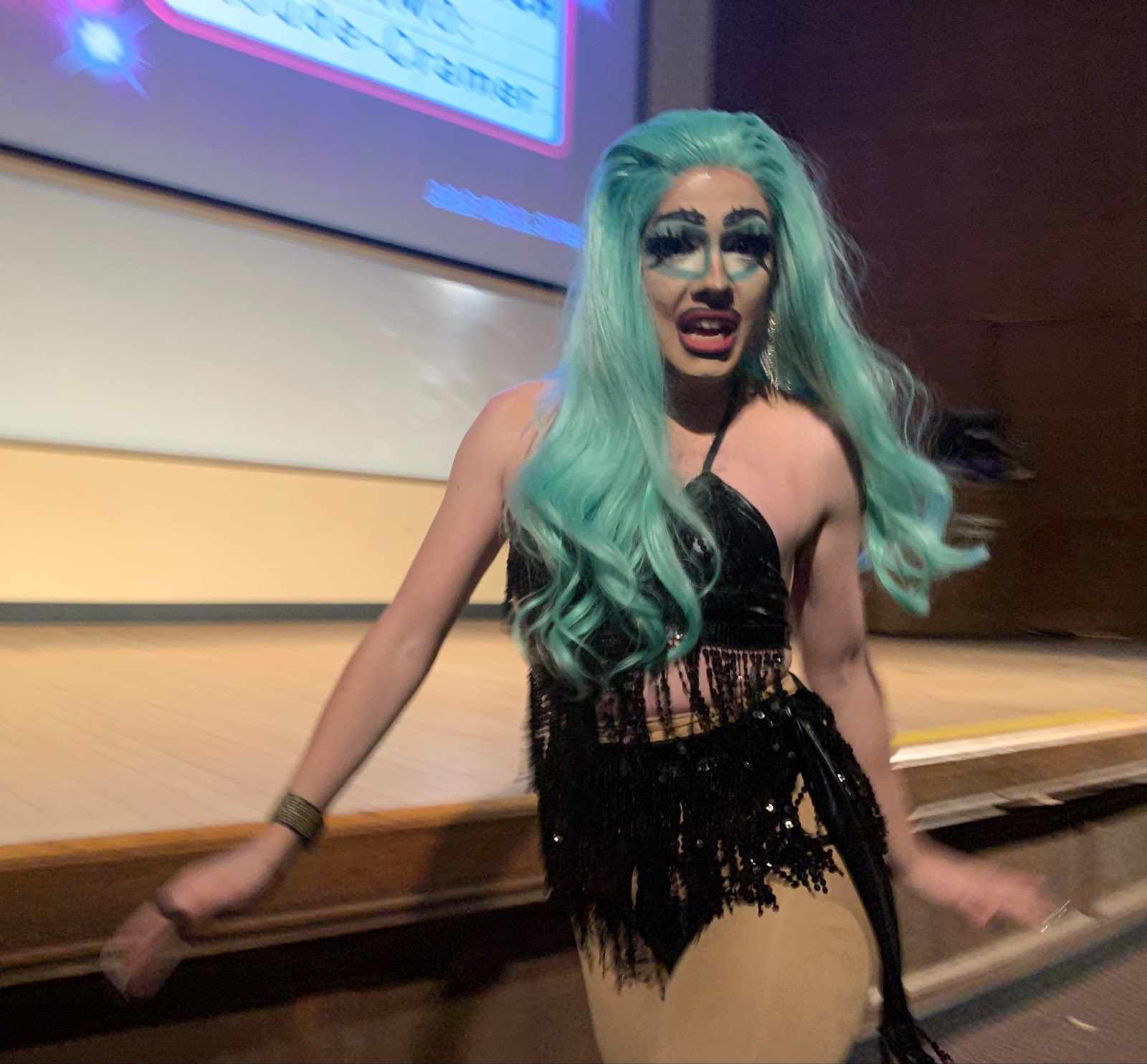 Karma ‘ZaBitch dances and prances through the front row of the auditorium during her performance.

For the final solo performance of the night, Even Steven brought up the rear. As the only drag king performing, Even Steven had some big shoes (and a big bulge) to fill, and fill them he did. In a performance with multiple reveals – confetti umbrella included – Steven stripped down from everyday office clothes to a completely hand-sewn Superman costume. My hero. 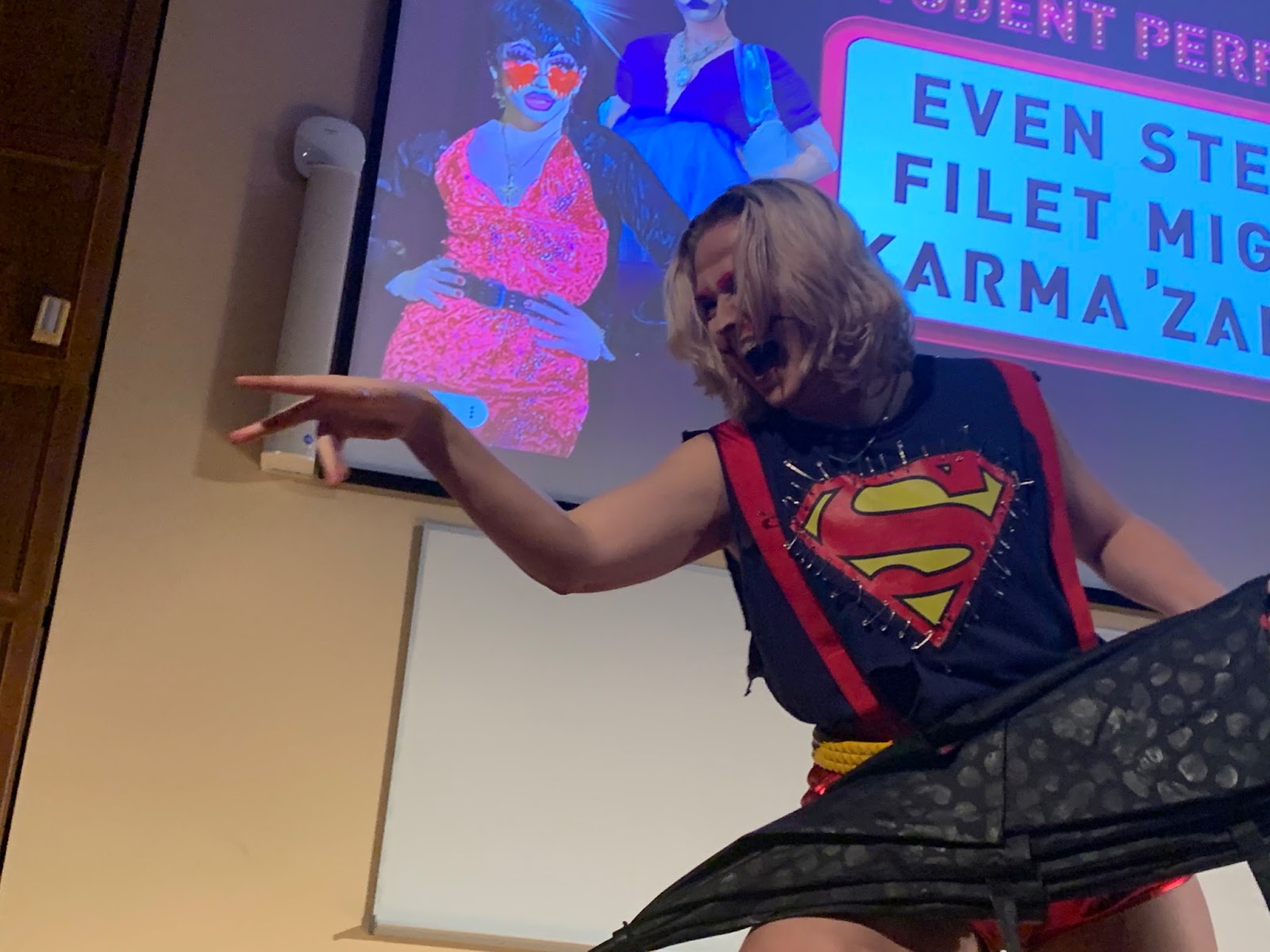 Even Steven sewed his entire Superman costume by hand.

After the individual performances, it was time for the group lip sync. All three student performers returned to the stage for what can only be described as absolute chaos and tomfoolery. Everywhere you looked on stage, they were giving their all. Even Steven was waving his cape around like a rhythmic gymnastics show. Karma ‘ZaBitch did a full-body leap into all fours that you could feel throughout the auditorium. Filet Mignon did a reveal at the first chorus into a completely different outfit, whipping off their pink dress to display a pair of daisy dukes and the words “CLAP 4 ME” emblazoned on their chest.

Just when I thought it couldn’t get any more chaotic, it did. During the bridge, all three drag artists spontaneously came together on stage in the greatest menage-à-trois I’ve ever seen. While the tension in the song built up, Karma and Steven mimed making out while Filet Mignon slinked up Steven’s body, paying generous attention to the drag king’s exaggerated bulge. When the bridge dropped, the steamy display heated up into action as the three assumed a new position. In a sort of drag centipede, Karma grinded on Steven while Steven grinded on Filet, and the whole group literally gyrated on stage just from the force of it all. 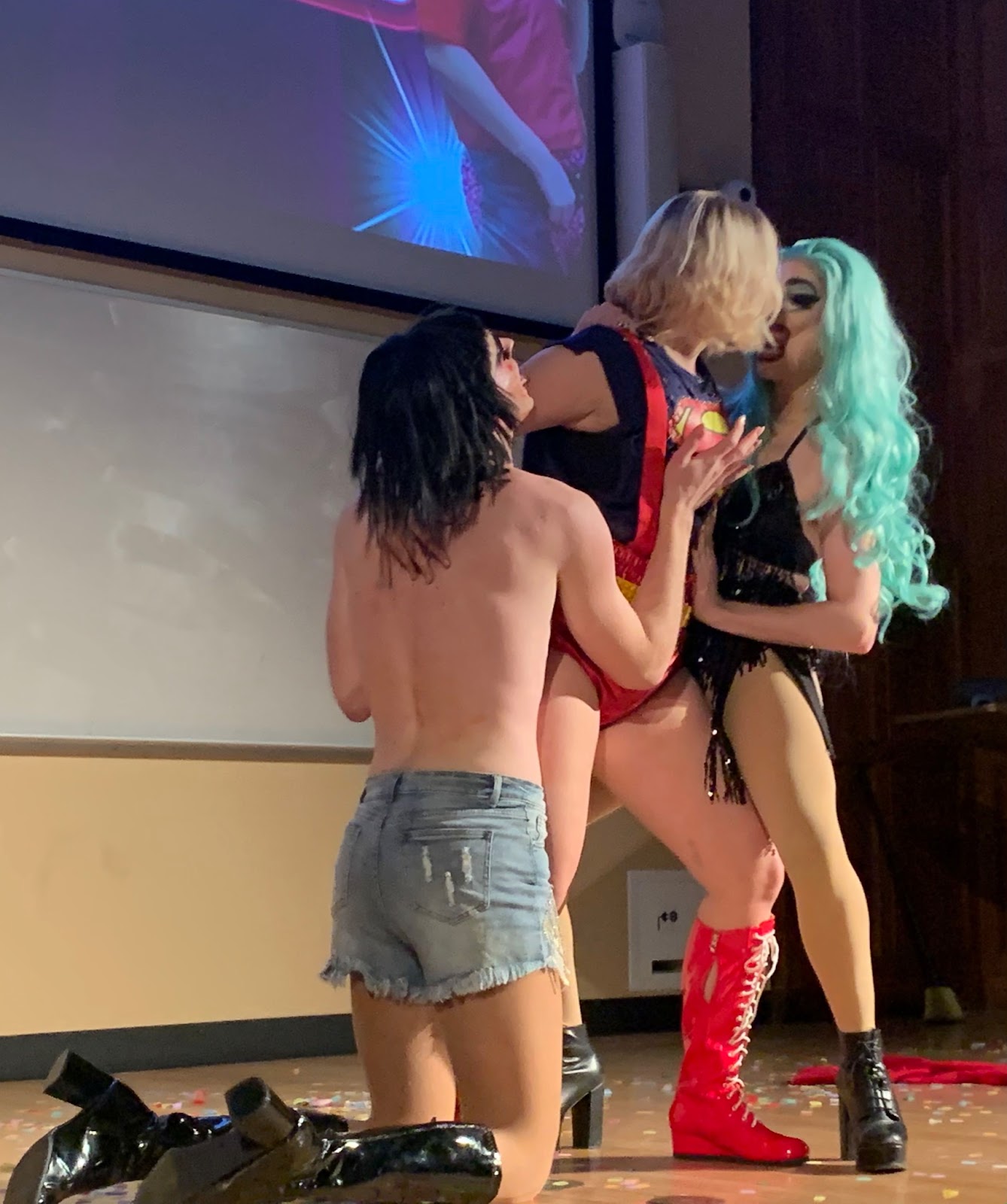 I think this picture speaks for itself.

To close out the event, Shea Couleé and Alyssa Edwards did a brief Q&A where they took questions from students. The queens talked about how drag pushes baby artists out of their comfort zones, how they’ve been able to watch younger fans of the show grow up year after year at DragCon, and the transformative effects their appearances on RuPaul’s Drag Race have had on their communities. Shea described being welcomed and adored by members of her Southern Baptist church after Season 9 aired; Alyssa said the community she had built through her dance studio, the Beyond Belief Dance Company in Mesquite, Texas, accepted her openly after her drag identity was made public when the promos for Season 5 were released.

In the end, the student performers rejoined Shea and Alyssa to bow for the crowd, and they received the most well-deserved standing-O I’ve ever seen. They hit the slay button, indeed.