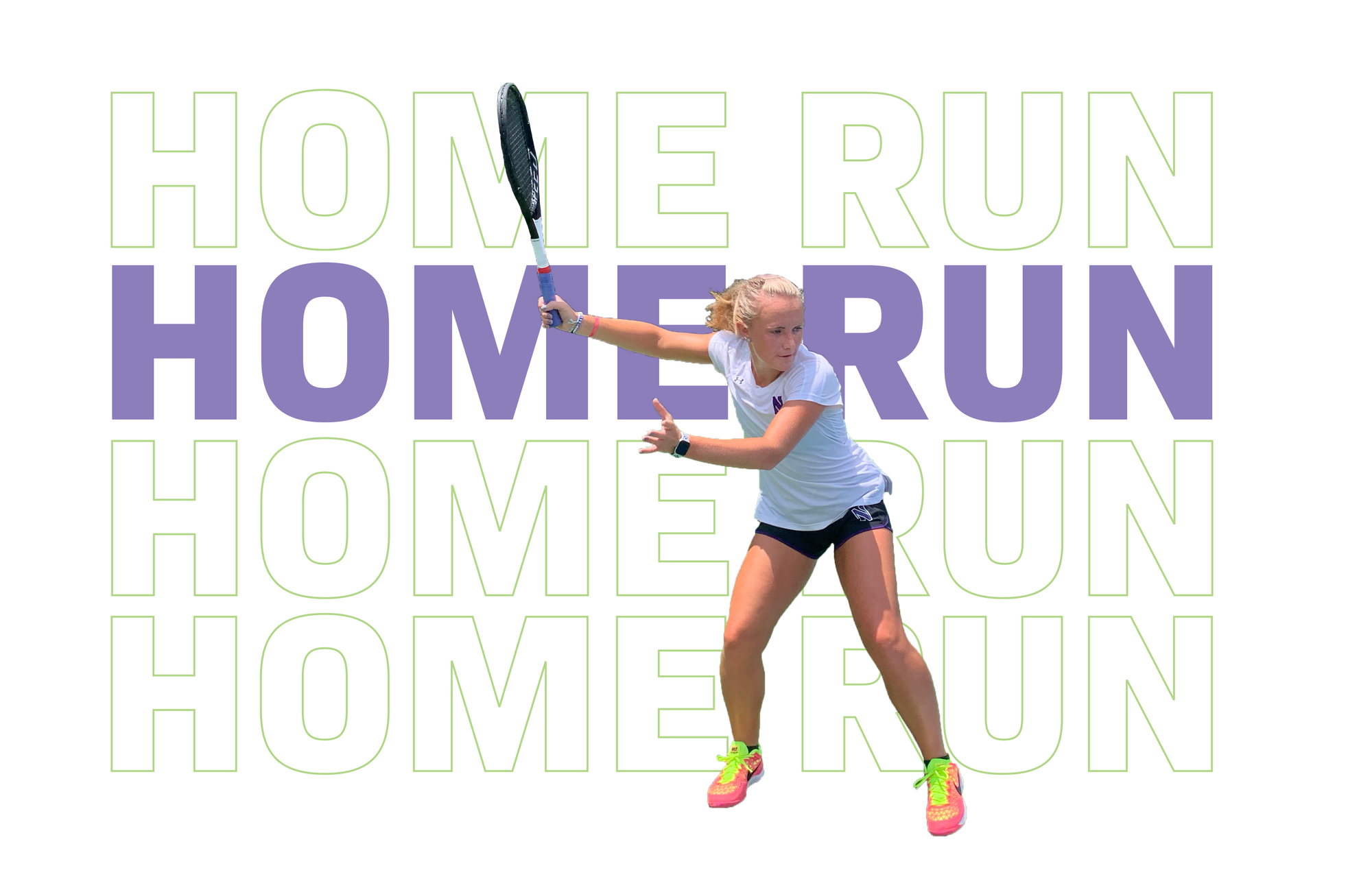 With their seasons upended, student-athletes adapt to at-home training.

Second-year tennis player Vanessa Streng receives texts like these on a daily basis from her teammates. Ever since they parted, training has become more than a means to stay in shape— these daily workout updates keep the team connected now that they’ve scattered around the globe.

"It's keeping the camaraderie of the team," Streng says. “Just knowing that we’re there for each other, and that even though we’re not at Northwestern, we still [have] that trust that we're working hard to the best of our abilities.”

The COVID-19 pandemic has canceled entire competitive seasons for Northwestern’s varsity and club sports. Whereas teams would normally have access to SPAC’s extensive equipment selection and a team of trainers and coaches, they must now find ways to stay connected and in shape virtually. Despite the added hurdles, though, athletes haven't lost their motivation to train or dedication to their teams.

Streng has had access to tennis courts in her neighborhood, unlike many of her teammates, whose local courts have been shut down. Northwestern Head Men’s Tennis Coach Arvid Swan says that this period of time — over two months — is by far the longest most of his players have gone without on-court practice.

“There’s nothing that replicates playing,” Swan says. “Whenever tennis is allowed to be played again, it’s going to take some time to get back to the standards [the players] are used to.”

For first-year field hockey player Samantha Cho, spring quarter was essential. Her coaches were going to implement a physical training regimen even more intense than during the actual competitive season to begin preparing her and her fellow new athletes for the fall. Now, Cho and her teammates must adjust to completing mandated drills while apart and without access to the same kind of equipment.

Northwestern’s athletic department sent the field hockey athletes surveys to determine what equipment they already had at home. Following that, each athlete was sent a package of basic equipment (such as resistance bands) from Northwestern’s sports performance department. Cho says she and her teammates use the provided equipment — along with random accessories (like a patch of old carpet in lieu of a field) at home — to complete their workouts. 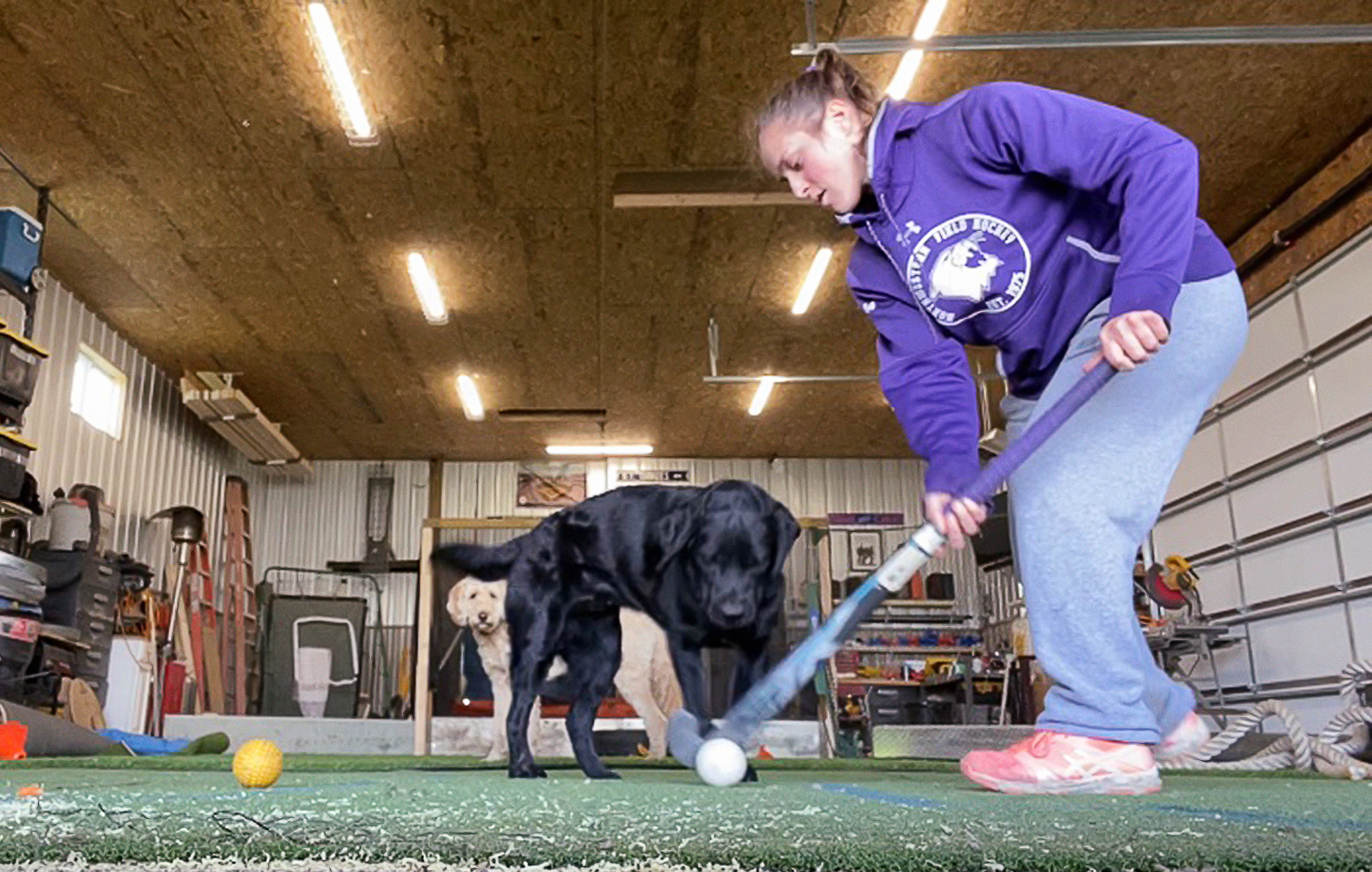 Second-year field hockey player Kayla Blas brushes up on her skills from the comfort of her own garage with the help of two four-legged teammates. (Photo courtesy of Kayla Blas)

The team has been separated into “accountability groups” to ensure they’re each staying on track with training. The groups also work together to complete video challenges each week, with the goal of making workouts more collaborative and enjoyable.

Per NCAA rules, Northwestern coaches can’t directly tell their athletes how to train while they’re off-campus. But trainers in the Northwestern sports performance department — who deal with physical training more broadly as opposed to specific sports coaching — can. Some teams such as field hockey are taking advantage of this, with the sports performance department recommending specific regimens to athletes. Other teams like tennis are taking a more hands-off approach, allowing athletes to train as much or as little as they can.

“I looked at it as maybe a healthy break that every tennis player probably needs to take more often but won’t allow themselves to,” says Northwestern Head Women’s Tennis Coach Claire Pollard. “The whole world's in this boat, so it's not like we're at any more of a disadvantage or an advantage of anyone else.”

While coaches and athletes are doing what they can to stay in touch and in shape in the short run, long-term effects on performance are still up in the air.

“It changes day-by-day,” says Pollard. “I think the intention and the hope is that we’ll get back to college athletics as it was, maybe with a few modifications.”

"I think the intention and the hope is that we’ll get back to college athletics as it was, maybe with a few .”

Sports teams’ busy practice and travel schedule means athletes and coaches usually see each other for multiple hours every day, especially during their competitive season. The time spent together often creates a tight bond and a close-knit group, according to Swan. Travelling, going to dinner and practicing every day builds unity and closeness within his team.

Swan has continued to call his players to check in, and the team has Zoom meetings that the coach does his best to keep light and fun. Nonetheless, he says virtual interaction doesn’t replicate the togetherness that exists on campus.

Since they’re entirely student-run and don’t receive the same support from Northwestern’s athletic department, Northwestern’s club sports are free from strict NCAA regulations. With the end of the school year approaching, many are also electing and inaugurating new executive boards – all from home.

“The biggest challenge has just been getting everyone on a Zoom call,” says third-year Jack Ferry, the incoming president of men’s club tennis. “[On our exec board alone], we have people in seven different time zones around the world.”

Ferry adds that team bonding has been harder, too, citing the difficulty of socializing in a larger group through Zoom.

“It shows how committed some of our current and past exec members are to the club,” Ferry says. “It’s about as good of a job as they could be doing at helping people improve and just be thinking strategically about tennis when we’re not able to play.”

Club swimming holds two dryland sessions a week over Zoom, encouraging strength training and conditioning that all swimmers can complete regardless of pool access. Normally, dryland sessions only occur once a week, but according to club swimming president third-year Anna Derrick, virtual dryland workouts might be the best available option. Still, she says they can’t recreate what happens in-person.

“We’re more efficient with dryland now because no one complains; we just do the work and socialize after,” Derrick says. “Doing dryland is going to help us stay in shape, but not necessarily swimming shape, which is unfortunate.”

An early end to competing and training may have thrown athletes and coaches for a loop, but they have nonetheless kept the circumstances in perspective.

“We’ve tried to just keep an eye on the big picture in the scheme of life,” Pollard says. “Losing a couple of months of tennis isn’t as big as some of the other losses that people have endured.”